The Thirteenth Jury: the Effect of Pretrial Publicity on Jury Deliberations

Literature review and questionnaire-based study were conducted to examine whether pretrial publicity(PTP) affects jury deliberations and how the PTP effect occurs, and ultimately to discuss whether jury trial system needs to be retained. The literature review shows that PTP has a powerful effect on the interpretation of trial evidences during deliberations and jury verdicts; in particular, jurors who are exposed to negative PTP are more likely to judge the defendant guilty, and such biased jury decisions are rarely corrected through existing policies. However, results of the questionnaire-based study reports that there is a significant possibility that the PTP effect can be controlled when danger of PTP is warned. Finally, necessity of jury trial system based on its irreplaceable benefits are discussed.

What do the O. J. Simpson case, Kim Gil-tae case, and Ko Young-wook case have in common? A great deal of information related to these cases had been revealed by the media – even before the trial began. Contents and details are publicized for widely well-known cases; in turn, there is a considerable probability that the general public have already formed a certain attitude or a prejudice against victim (plaintiff) or the accused (defendant). Biased jurors selected from these prejudiced public may arbitrarily reorganize and interpret evidences presented in court; this is known as the effect of pretrial publicity (PTP). PTP can arouse people’s attention to the crimes, but at the same time jurors can be affected and biased when it comes to jury trials, which is a serious problem.

The judiciary in Republic of Korea has partially adopted a jury trial system since 2008, which is restricted to criminal cases, in which a verdict has a mere advice effect. The jury trial system has been criticized since its introduction – especially in that jurors can easily be biased compared to professional judges, which leads to the possibility of biased jury deliberations. Some articles even say that the jury trial system is barely suitable for Korean culture since Koreans are relatively more emotional; thus, they are more likely to be influenced by the media.

PTP is permitted in the United States, while in the United Kingdom, Canada, Australia, and New Zealand it is strictly regulated. The jury trial system itself has not been invigorated in Republic of Korea, and there are no stipulated regulations on PTP. Yet, the PTP issue must be analyzed and discussed in advance to prepare proper and effective solutions since this problem will be confronted as the jury trial system is continuously enforced. Thus, three important questions are worth considering: How does PTP have an impact on jury deliberations? Are there any solutions to prevent the PTP effect? If the PTP effect is inevitable, should the jury trial system be abolished?

Primacy effect and theory of cognitive dissonance are able to explain how PTP biases jurors against the defendant. The primacy effect is a phenomenon that people tend to remember the initial information more than the latest information; thus, the order in which people receive information has a substantial effect on their decision-making (Dennis & Ahn, 2001)[1]. Under the influence of the primacy effect, jurors assess the evidence presented in the court and make deliberations based on the information they received before being chosen as a jury (Otto, Penrod, & Dexter, 1994; Ruva & LeVasseur, 2010)[2]. Jurors even disregard or distort the evidence inconsistent with the initial information, which stems from the theory of cognitive dissonance that people have a psychological tendency to deny or alter the newly received, inconsistent information to attain cognitive balance – no matter how much effort is required, or no matter how such rationalization is illogical (Stone & Cooper, 2000)[3]. In fact, a study on mock-jury trials shows that the former information affects the latter one; thus, a sequence in which a series of related information are transmitted is critical when a judgment is made (Schum, 1993)[4]. According to this study, approximately half of participants ignored or even perverted evidences presented later when the latter ones are in discord with the former ones. Another study based on story model suggests similar results that jurors placed more weight on the former evidences than the latter ones (Pennington & Hastie, 1993)[5]. The jurors organize a certain story related to a case based on the information they know; at this moment, the information which is used for constructing the story contains both the one known from PTP and the one from the court. According to this study, the information presented by PTP is reported to be more influential since the jurors encounter PTP first when forming the story. Simply speaking, people are cognitive miser; people are unlikely to change their mind even if the opposite information is newly suggested – regardless of how credible or valid the new information is. Thus, the order of information jurors receive is critical, which is a dominant mechanism underlying the PTP effect.

As mentioned above, the PTP effect can cause jurors to have a biased attitude; however, this possibility should be proved by empirical studies, not by abstract contention. First, field studies have been done on actual cases using a questionnaire to investigate what kind of information that people are exposed to, what they think of the evidences presented, and, ultimately, whether they think that the defendant is guilty. For better comparison, such questionnaires were distributed to both the region where cases occurred and the third region where the PTP effect was expected to be comparatively weak since it is physically and geographically remote. One field study was conducted to inquire into the PTP effect on five murder cases (Nietzel & Dillehay, 1983)[6]. A proportion of people exposed to PTP was higher in the regions where the cases occurred; people residing in such regions know more detailed facts on the cases; a tendency to find the defendant guilty was higher as well. Another field study on the demolition of a U.S. federal building in Oklahoma City showed similar results (Simon & Eimermann, 1971; Constantini & King, 1980-1981)[7]. Researchers measured a degree of PTP in three regions – Lawton which is relatively close to Oklahoma City, Tulsa which is located in the same state with Oklahoma City but less closer, and Denver which is located in an adjacent state, Colorado. The closer the habitat was to Oklahoma City, the more people knew about the details on the case, the more emotional they reacted, the stronger their confidence that the defendant was guilty was; Specifically 54% of residents in Lawton, 47% of those in Tulsa, and 18% of those in Denver responded that they were convinced of the defendant’s guilt. Meanwhile, one study discovered an interesting finding that respondents of questionnaires believed their judgments were significantly accurate and impartial even though they made judgments based on PTP (Moran & Cutler, 1991)[8]. These field studies indicate that the closer a region is to an area where a case occurred, the more details on the case spread; in proportion to the known details, a conviction that the defendant is guilty is stronger. Such field studies have higher external validity which indicates the similarity to reality; on the contrary, it is difficult to control irrelevant variables, which makes hard to form a causality.

Experimental studies have been performed to complement the weak points of field studies by systematically controlling PTP and other variables. A recent study demonstrated negative effects of PTP (Kramer, Kerr, & Carroll, 1990)[9]. Researchers estimated a difference in the PTP effect depending on types of PTP – objective PTP and emotional PTP. Participants were suggested either objective PTP or emotional PTP, watched a 51-minute video reenacting an actual trial on armed robbery, and made a verdict through deliberation as do real jurors make. The participants exposed to emotional PTP had a 20% higher possibility of finding the defendant guilty compared to those exposed to objective PTP. This figure includes hung jury who could not reach a verdict; thus, a higher possibility would be drawn if hung jury is excluded. Another experiment showed similar results that participants were influenced most by PTP regardless of whether they received admissible evidences; moreover, they even misremembered evidences presented in the court because of the PTP effect, more likely to find the defendant guilty when exposed to PTP, and did not alter their PTP-affected judgment (Penrod & Otto, 1992)[10]. A meta-analysis study verified that participants exposed to negative PTP were more likely to declare the defendant guilty compared to those exposed to non-negative PTP (Steblay, Besirevic, Fulero, & Jimenez-Lorente, 1999)[11].

The earlier studies proposed policies to prevent the PTP effect: continuance, voir dire, judicial admonition, and jury deliberation. First, continuance is a typical tool implemented in the United States, anticipating disappearance of the PTP effect as time goes by. Media reports on a case are usually concentrated shortly after the outbreak of the case; there will be relatively higher possibility of the PTP effect when judicial procedure is immediately instituted. Second, jury candidates go through voir dire – a procedure of asking questions to detect whether a candidate is biased against a certain case. An extended and reinforced voir dire process may be able to weaken or even eliminate the PTP effect. Third, judges can make judicial admonition to jury candidates that they should arrive at a verdict based only on the evidence presented in the court, not on the inadmissible evidence, and disregard all the other information received from outside of the court. Finally, jury deliberation itself helps prevent the PTP effect. A few jurors well-informed of the PTP effect can warn other jurors when the PTP-related information is mentioned.

Some empirical researches have demonstrated that the policies mentioned above are comparatively ineffective and at times backfire. First, a meta-analysis showed that the opposite effect was produced when implementing continuance; the correlation between PTP and jury’s decision increased over time (Steblay, Besirevic, Fulero, & Jimenez-Lorente, 1999)[12]. Second, another research pointed out that there was no statistically significant difference between minimal and extended voir dire (Dexter, Cutler, & Moran, 1992)[13]. Third, an experiment indicated that, among the participants who answered that they could make fair decisions, 53% of them judged the defendant guilty twice higher when they were exposed to PTP, while only 23% of them did so when they were exposed to other irrelevant information (Sue, Smith, & Pedroza, 1975)[14]. This implies that it is difficult to filter out the PTP-related information even if jury candidates believe themselves that they can reach rational and fair decisions. Finally, an empirical research showed that jury deliberation did not mediate bias generated by PTP (Otto, Penrod, & Dexter, 1994)[15].

Design and Procedure. A questionnaire was designed to figure out the relationship between recognition of a danger of PTP and confidence in the defendant’s guilt. Participants(N=65) were divided into two groups – a group with a warning about the danger of PTP and a group without any warnings. Both objective and emotional articles on an actual criminal case were given to the participants; they were asked to check how confident they were that the defendant in the case was guilty, ranging from -5 to 5. The participants in the warned group, in particular, were asked to check their confidence in the defendant’s guilt twice – before and after the danger of PTP was informed. 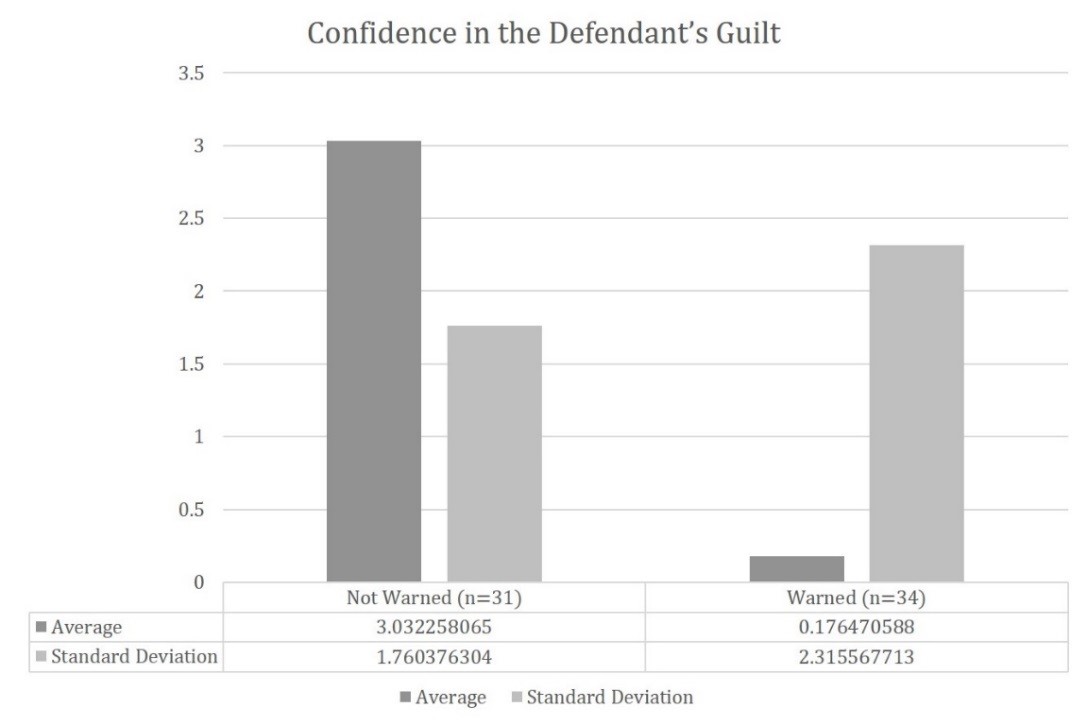 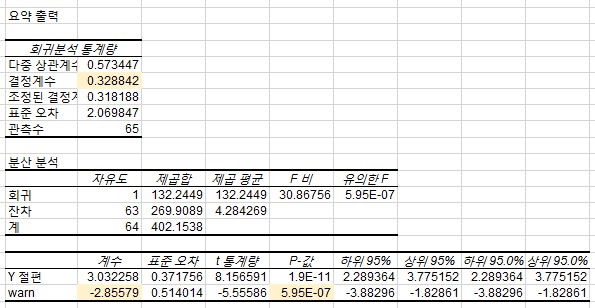 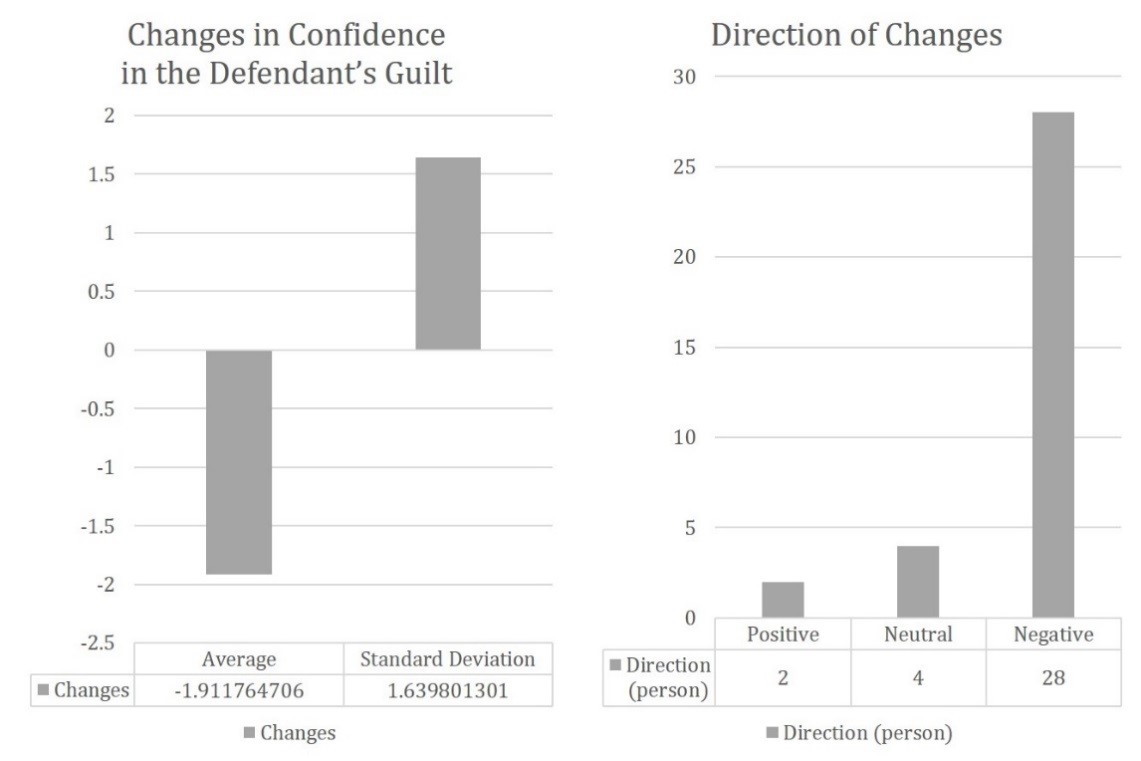 Figure 2. Results of One Sample T-test

There is a significant possibility that the PTP effect can be controlled as proven through the results of the questionnaire; unfortunately, however, any policies to effectively filter out the PTP effect have not been developed so far as shown in the literature review. Therefore, further researches on the effective ways to countervail against the PTP effect are required.